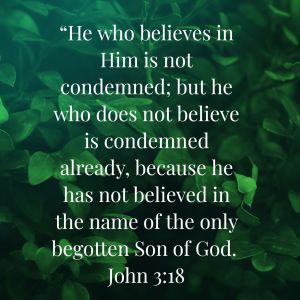 God, being a righteous God, has condemned all men without exception, because of the sin nature that is stamped on his soul as a result of the fall of our first parents, Adam and Eve, not to mention his actual sins done daily in thought, word and deed; unless the Holy Spirit make them alive from being dead in their trespasses and sins, and is given the gift of faith and granted a repentant heart.

Let this, however, NOT be an excuse to not proclaim the gospel of Christ to the lost and those who sit in darkness. Those who DO believe in Jesus Christ will NOT be condemned but WILL have everlasting life . . . and how shall they believe without a preacher (or “proclaimer,” one who declares the gospel, calling people to repentance and faith in Jesus Christ – Romans 10:14)? All who are in Christ have been called to declare the message of the gospel in word and in deed, with their mouths and with their actions. . . . and why wouldn’t you? You possess a message, having been made a living part of it; the greatest news any man, woman, or child could ever possess (Romans 1:16-17; 1 Peter 2:1-10)!

So let this verse be an encouragement to faithfully and unashamedly proclaiming “the praises of Him who called you out of darkness into His marvelous light; . . .” (1 Peter 2:9). Pray for the courage, the strength, and love by the Holy Spirit to proclaim the gospel of Jesus Christ according to God’s word of promise, as revealed in Scripture to the glory of God.

This site uses Akismet to reduce spam. Learn how your comment data is processed.