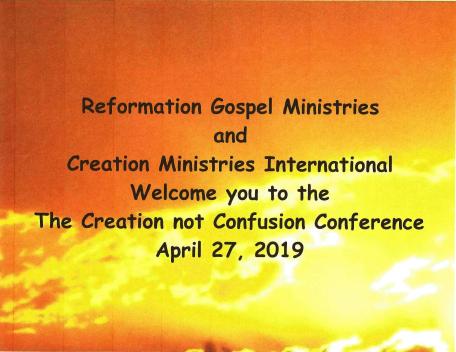 The Lord used the Creation to strengthen the faith of many of His people and worked grace in the hearts of all who attended convincing, convicting, and converting according to His good pleasure 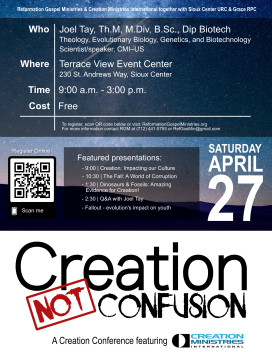 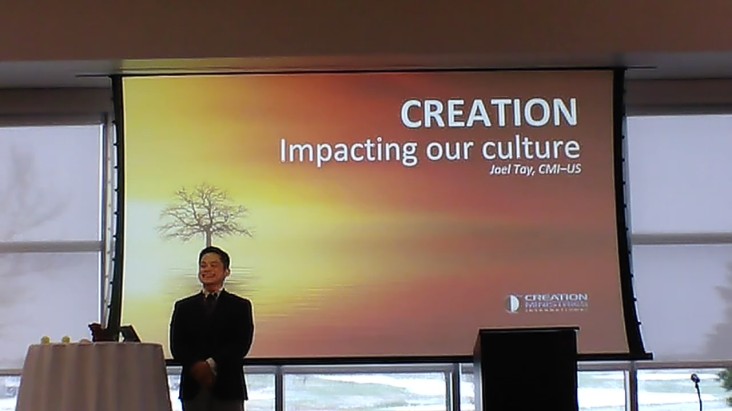 Joel Tay was the Speaker from Creation Ministries Internation

Reformation Gospel Ministries (RGM) was pleased to arrange and coordinate this conference where about 80 people attended to listen to the speaker/scientist, Joel Tay, as presented the Biblical case for 6 day creation about 6,000 years ago. It was exciting to hear Joel using the Bible through which he interpreted the scientific evidence that everyone is able to see.   He skillfully answered many of the questions that have plagued many who profess faith in Jesus Christ and uphold the authority of Scripture. 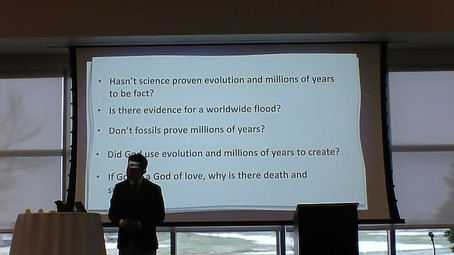 These questions were soundly answered as Joel answered each question from the evidence science presents to all of us:

Though creation is not the gospel, it nonetheless lays the foundation for the Gospel of Jesus Christ, and is fundamental to it.

The conference went really well both days. The presentations were well received & the resources were eaten up; many of them purchased on Saturday directly from Creation Ministries International – on the Lord’s day we gave out about $1,500 worth of books, which were purchased and made available for free to the congregants of two churches (Sioux Center United Reformed Church in the morning and Redeemer United Reformed Church in the evening) where Joel spoke after their services – not much was left by the second service – Praise the Lord!

The Lord blessed those who attended with new insight and understanding strengthen them further in upholding the infallible, inerrant Word of God. They were encouraged and embolden in the faith. Praise the Lord!

Please keep on praying that the Lord will use it to increase & strengthen the faith of the believers & those who are unbelievers repentance & faith in Jesus Christ. Pray that the information given in the conference will be eagerly dispersed within the communities represented (as far as Mitchell and Sioux Falls, SD) and that God will grant grace to the churches in Sioux Center and the surrounding community will take a stand for the truth as it is revealed in Scripture.

The conference was videoed; sadly, the sound didn’t come through. As a result, Rev. Stetler put together a series of “screen shots” of parts of the presentations in a slideshow format. This should be available soon for download without charge – will keep you posted when it is.

Notwithstanding, we located a video of Joel making a presentation 2 years ago at a church event. Much of what he said at this conference was presented in the video linked below at the bottom of this post.

BTW, we have already been asked when the next conference will be. We are looking at the possibility of bringing in a different speaker next year who specializes in genetics. We are in the process of getting that set up with Creation Ministries International. We’ll keep you posted that event as more information is available.

THANK YOU, THANK YOU, THANK YOU: Reformation Gospel Ministries would like to thank the churches that co-sponsored this conference: Grace Reformed Presbyterian Church, Orange City, IA; Sioux Center United Reformed Church, Sioux Center, IA; and Redeemer United Reformed Church, Orange City, IA. We would also like to thank those who volunteered to help make this event a success – your efforts and labors of love in the many areas there were needed – it definitely was not a one man show; there were many laborers in Lord. It is with heart felt gratitude that RGM would like to thank all those who made donations that went to fund this very important event. We received generous donation from local churches and from many individuals. Without your generous gifts together with the grace of God this event would not have been possible.

Reformation Gospel Ministries is a donation driven organization. Your donations will help give RGM the ability to hold future events such this one and to hold other evangelism events, such open air park evangelism, participating in community parade handing out gospel tracts along the parade, etc. Reformation Gospel is a non-profit 501(c)3 organization. Your donation is tax deductible as allowed under the law.

This site uses Akismet to reduce spam. Learn how your comment data is processed.